Our nation has elected a vainglorious bastard who is willing to use racism, nationalism, xenophobia, Islamophobia and more in his effort to gain power.  His victory has emboldened the forces of hate within our nation, to be more aggressive in their strategies of intimidation.

A few weeks ago friends of a friend, a transwoman and her female partner, who live a few counties from me in rural Indiana, woke up to find this spray painted on their home. 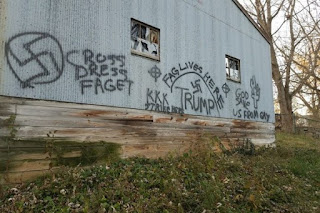 Notice the Swastikas.  Notice the line "KKK strike here."  Notice the burning cross labelled "God save us from gay." (Yes, in the singular.  I guess it is one gay in particular they are praying for salvation from, and since two queer folks live in that house together ....).  Today my wife saw a Black swastika on a red background painted on a board and for sale at a yard sale a few blocks from our house.  On her way home from the store it was gone.  Perhaps one of our neighbor bought it.

This is our nation now.  This is my life.   In mid-November, I wrote a post about what we should be doing in the aftermath of the election, entitled "November To Do List." But, life got away from me, and I didn't finish that post.  Heck, didn't even accomplish much of my own to do list.  It would have been my first blog post for over a year, since I retreated from the national blog I was part of after accusations of being racist.  I probably am, but I try not to be.  And I sure don't hate any ethnicity, or wish ill on other ethnicities, or supremacy for my own ethnicity or any of that junk.  I truly value the contributions that many different ethnicities and kinds of folk make to food, and art, and music, and culture in general.  We are ALL stronger, and lead richer more beautiful lives because of our diversities.  This new wave of awful makes me sick.  I was trying to find more healthy and constructive outlets for some of the frustrations impoverished rural white folks feel.  My ethnicity gets to be part of this process of valuing diversity just like the others do, instead of just being seen as the oppressor.  (We are and have been that, but we are also more than that).  My grandmothers were't perfect, but their apple cakes and meatloafs are part of what makes America beautiful, along with the tacos and Alabama alchemy, and the local Jewish deli, and dozens of other things.  I was trying precisely to try to prevent something like the white backlash that appears to have happened/be happening, but it never worked and now the hate is here in force.  And plenty of innocent Muslims, and black folks, and hispanics, and LGBT folks, and in the end all of us, are going to suffer.

Our president-elect is a Nationalist, and if not a Fascist already, is in spitting distance of Fascism and eyeing it consideringly.  Based on his VP pick, his cabinet choices so far, his staff and transition team picks, he's perfectly willing to cozy up to the Nationalists and Fascists drooling to have power in government.

So what are we to do in response?  Everyone will have their own opinions, but here is mine.  I'm issuing a December To Do List, to all Americans of good heart who would like to find constructive ways to resist the creeping slide of our government into Fascism, and of our populace into hatefulness.

To Do for December

1)  Mourn - You get seven days of being miserable and useless.  You don't have to do jack during these seven days and probably shouldn't.  If you must work, work in phone-it-in mode.  If you have to work for real, don't count that toward your seven days of miserable uselessness.  But once you've spent your seven days, you can still be miserable and mourning, but you have to start working towards a better tomorrow again.  You have to get up and start trying again.  Doing your work for real.  Thinking about coping with the situation.  I've already spent my seven days of useless misery, and I'll bet most of you have too.  By December you've probably used up your allotment.  But on the off-chance you haven't gotten the chance to break down and cry and vent and be with others while also being a total wreck, well that's at the top of your to do list.

2) Get Your Paperwork In Order, (especially if you are trans, or female and want long-term birth control) - Make sure you have a passport.  And your kids do.  If you are trans, do everything you can to get your paperwork to reflect your actual name and gender, instead of just your old name and gender.  I'd been putting this off.  It didn't seem pressing.  It's pressing now.  The new administration can and will make this process much worse shortly after they get into office.  Right now, you only need a doctor's letter, (and some money) to get the gender marker on your passport changed.  But that is by executive decree.  Trump can change that whenever he or his proxies get around to it, after he is inaugurated.  If you have to leave the country, the gender marker on your passport will be one of the few pieces of evidence that other countries will accept that you are indeed trans.  Start the process on driver's licences or birth certificates, or any other paperwork you might have.  If you know trans people, ask them about their paperwork.  Help them if you can.  If someone needs a loan to apply for an updated passport give it.  A bunch of legal services are trying to do clinics for name and gender change for low-income trans folks, because it is so important to get that done ASAP now that Trump has won.  Similarly, if you are female and interested in getting an IUD for long-term birth control, schedule the doctor's appointment NOW.  Get the ball rolling.  Getting birth control is likely to be quite a bit more of a hassle after Trump is inaugurated.

3) Write about your core values - Sarah Kendizor has a brilliant essay here, that argues that a key early step in resisting creeping (or sprinting) Fascism, is simply to write about yourself.  To create a record of who you are and what you value, BEFORE the Fascist culture gets too far along.  In the coming times you will be forced to make compromises.  You will normalize things that would have horrified you a while ago.  So take the time, SOON, to write about who you are.  What you value.  What your core is like.  What is acceptable to you and not.  Ideally this will remind you.  Ideally in coming times you will be able to look back on this document and it will help you to resist taking a step too far, a compromise too far.  I've started this process, but am not done.  If I finish my, there is a good chance I'll get the courage to post it.  You know to avoid grading a little longer ...

4) Supporting businesses - When my wife told me about seeing the handpainted Nazi flag at the neighborhood yard sale, my first response was, hmm maybe we should have lunch at the neighborhood Jewish deli, the Oy Vey Bakery (I would have sworn I did a restaurant review for them for my old blog, hmm, they must not have opened before my old blog folded, well here is their own site, Oy Vey Bakery and Deli).  One easy way to show your love and appreciation for the Mexicans, and Muslims, and queer folks, and jews, and black folks, and well, the whole panoply of folks that are going to get extra static from recent events, is to say hi, and be nice.  Wear a safety pin if you want to.  Go out of your way to be nice and polite.  Or better yet, patronize their businesses and be nice while you're doing it.  December involves gift buying in many American traditions, so think about if there are ways you could buy gifts from folks like this.  And when you do be friendly.  It helps remind you how many different kinds of folks contribute to the betterment of our lives, and it reminds them that folks value them for their own talents and passions and work.

5) Celebrate the Holidays - Lots of American traditions celebrate holidays in December.  If your tradition is one of them, don't skimp on it this year.  Take a break from mourning and gloom and doom to celebrate instead.  Perhaps your tradition involves celebrating the birth of a middle eastern Jewish baby whose parents were far from home for political reasons.  Perhaps it involves gifts that are a modern re-enactment of Iranian Magi giving gifts to a poor child they didn't know. Perhaps your tradition is about keeping the light of hope burning miraculously long after it should have gone out.  Perhaps it is about valuing the unity of the community even when the community isn't so friendly to you.  In my tradition, it is about how even at the darkest times, the light returns, and the seasons turn. But however it is for you, celebrate, and use your celebration to remind you of the values you have that help you oppose creeping Fascism.

6) Thinking about and Organizing for Harder Steps - I suspect the time is coming when we are going to need to do things a lot harder than the first five I've mentioned.  I think a national strike on Inauguration Day, for example, is a very tempting possibility.  I've not seen a lot of do right now things that seem plausible to me though.  I doubt lobbying congress is going to have much effect immediately after they have just won their seats, unless you were an important backer of the winner or have a lot of money for example.  But learn who your allies and opponents are.  Begin the process of organizing.  Some direct actions may help if they are very carefully targeted.  A friend of mine and her mom are going to drive to Standing Rock in mid-December, and are hoping to take a bunch of supplies.  If you want to donate supplies to Standing Rock that makes a lot of sense.  (Try not to further the stereotype of white folks treating it like winter-Burning Man though, if you go work hard to be respectful and genuinely helpful).  Wanna donate to recounts?  I don't think that will change much, but I do think it will be good in it's own right for a variety of reasons.  In my opinion, the time for more widespread direct action is not here yet, but it is probably coming, and the time for organizing and preparing is always.  Think about what you can do.  What you are willing to do.  Who you can do it with.  Talk with others about what you can do together.  Stay healthy and save your sick days, I suspect we'll be spending some of them soon ... 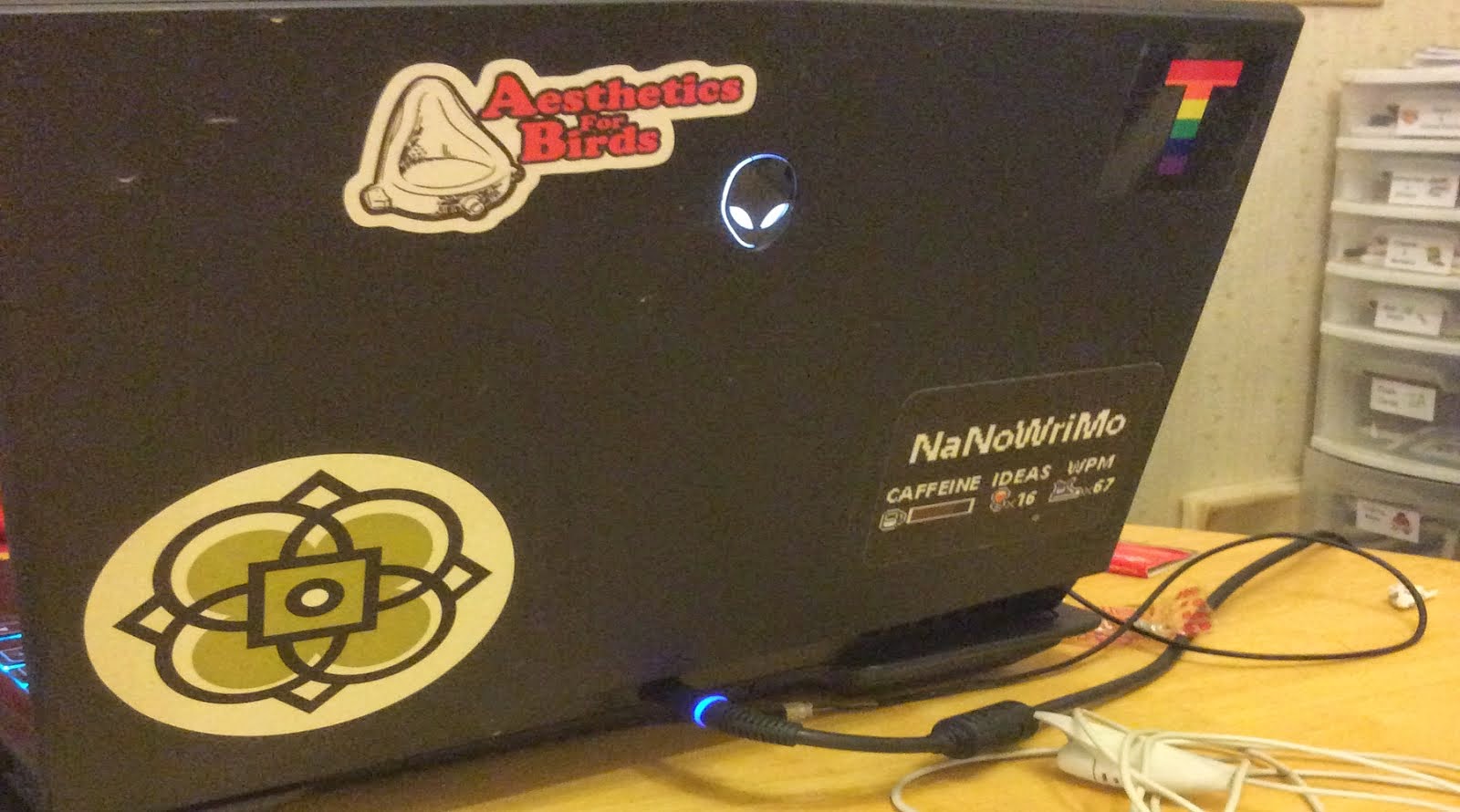